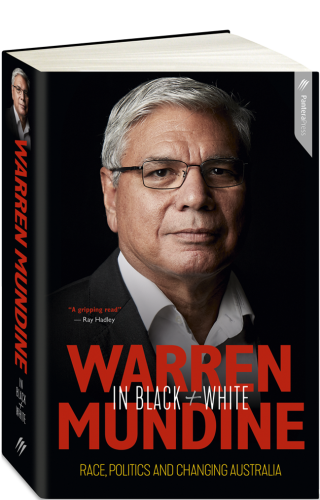 What people are saying about Warren Mundine In Black + White: Race, Politics and Changing Australia

“A raw and compelling story that reveals the meteoric and controversial rise of one of the most formidable Indigenous leaders in the country. Warren Mundine’s journey from working class Aboriginal boy from South Grafton to PM’s chief Indigenous advisor is an intimate read about a boy who refused to know his place…” – Patricia Karvelas, ABC and Sky News Presenter

“When the 11-year-old Warren Mundine sat with his family, crowded around the radio, hearing boxer Lionel Rose win his world title fight, Australia changed – and not just for the Roses and Mundine’s.  A new generation of Aboriginal Australians found their place in the world. The Mundine’s moved to Sydney in search of work and education.  Formed by strong parents, supportive siblings, church schooling and the school of hard knocks, Warren Mundine expanded his horizons from school books to Milton Friedman, and from work and family to politics and society.

Self-mocking, brazenly honest, always down to earth, good hearted, and no cowering admirer of any prevailing orthodoxies, Mundine mixes with all types, across the political spectrum, in board rooms and at the shopfront.  He readily admits his mistakes.  He’s always moving on with optimism and hope, sustained by his large and loving family and by the resilience of the Bundjalung and Gumbaynggir nations.  No wonder prime ministers on both sides have sought his counsel.  His autobiography is a ripping yarn about Australians coming to a sense of belonging with each other across the barriers of racism and dispossession.  At home in his own skin, Mundine offers all readers a sense of what it is to be a reconciled nation.” – Fr Frank Brennan SJ AO, CEO of Catholic Social Services Australia

“I am a Warlpiri woman. My parents didn’t even see a white man until the end of their childhood. I was born in a remote, desert community at a time when almost half of our babies died in infancy, the highest infant mortality rate in most of the world. Four of my siblings passed away before I knew them. I came close to death myself as a child and as a young adult and survive now only because of the magic of white man’s medicine. For that I am grateful. My first language is Warlpiri. My story and Warren’s are very different but also we have a lot in common. We are both Aboriginal Australians and proud of our people and our culture.  We both come from large families. Our fathers were workers. Our mothers stood by our fathers and looked after their kids. Our parents were determined that their kids would get a decent education, that we would know our own culture and learn whatever the whitefella could teach us that would be useful to us. My people are now in crisis. I have just learned of the passing of another beautiful young mother, grand-daughter to me, well before her time. I get news like that far too regularly. I found Warren’s story inspirational. We all have different stories and we can all learn from each other if we have the ears to listen. If Warren can achieve what he has in his life then any Aboriginal child can achieve his or her dreams. I recommend this book to all Australians, including my own people. In stories like Warren’s we can find answers to our own problems.” – Bess Nungarrayi Price, Alice Springs

“This book caught me by surprise. The stories Warren Mundine tells of his parents and grandparents, of his own childhood and his brothers and sisters are very interesting. It is very clear that Mundine’s life itself informs his ideas – whether they be moral, intellectual or political. He is not an academic, but someone who must experience the world for himself first hand. This book is well worth your time. A very well written and thought provoking read.” – John Purcell, Booktopia

“I’m convinced Warren Mundine in Black + White should be a textbook for all high school students. It makes me really determined to ensure nothing like this could happen again… offering valuable insight into Aboriginal history.” – Ray Hadley

“An extraordinary tale of overcoming discrimination, political betrayal and a belief in the power of economic opportunity… I couldn’t put it down, I was supposed to be skimming through it and it’s such a rocker of a read… I don’t recommend books very often, but I do recommend this. Congratulations on a wonderful book.” – Ticky Fullerton, Sky Business

“We share a great regard and great respect for a man I regard as a great Australian, Warren Mundine… He has written a most provocative book, which is compulsory reading. It’s a virtual history of Australia… The book is compulsory reading… Keep dishing it up to them, Warren.” – Alan Jones, Jones and Co., Sky News

“…and there’s an awful lot including a very special Australian who’s got a very important book out. You’ve got to buy one for yourself and someone else for Christmas because it’s that damn good… Warren Mundine has an incredible book out about his life, about our country and about where we go. It’s a stunning read…” – Paul Murray Live, Sky News